Living Stones.... The Story of All Saints' Halifax

The following short history of the church (building, clergy and people) should give you a feel for this parish church. A much fuller account can be found in the book “Living Stones” written by Ken Sawyer.

In November 1996, All Saints’ celebrated the 150th anniversary of its life, worship, mission and service. The infant Church of England parish was one of the new districts resulting from Sir Robert Peel’s New Parishes Act of 1843, designed to make pastoral and other provision for the rapidly growing industrial areas. Carved out of the very large parish of Halifax, most of the area served then also comprises the present parish, covering Salterhebble, Skircoat Green and Copley, at the south end of the town of Halifax. No financial provision was made by Peel’s Act and it was in this parish, without church buildings, that the 28 years old John Henry Warneford was planted as Vicar, to begin a pioneer ministry which was to last 52 years! The vast majority of the population was working class mill hands, factory workers, other unskilled labour and their families. There were also skilled artisans, tradesmen, some professional men and a few “gentlemen”-textile manufacturers or merchants.

Warneford gradually overcame the suspicion of many people and gathered a group of regular worshippers in three temporary worship rooms. He also followed in the wake of Lord Shaftesbury and other lay Christian leaders, by tackling some mill owners and other employers about the dreadful working and living conditions of many of his parishioners. It was some of these employers who later became great supporters, notably the Holdsworth family, especially William Irving Holdsworth of Shaw Lodge and his brother George.

As well as being a man of compassion, John Warneford also had a strong Gospel vision. It was by his determination, and the notable support of Archdeacon Charles Musgrave that the land on Dudwell Lane was obtained for the site of first the Day School (1854) and then the Church in 1858. This was a typically Victorian Gothic building of its’ period, later needing extension in 1874. There was a clear Evangelical direction in Warneford’s teaching and leadership. In later years he ensured that right to nominate a new Vicar, or the Patronage as it is known, was bought and placed in the hands of Evangelical trustees. During his time two parts of the parish were split off to form their own parishes. Copley St.Stephen’s in 1865 and St.Jude’s in 1890. He also pioneered the worship centre in Siddal, which was the basis for the parish of St Mark’s in 1915.

When he died in 1899 a “Halifax Guardian ” columnist wrote that Warneford had left ” a great spiritual legacy”, and that his ministry had been “a great accomplishment”. What had been established was the continuing worship and witness of the “living stones”, scripturally referred to by Warneford at the time of the laying of the foundation stone of the building as the most important stones. There have always been committed people leading various groups, teaching in Sunday School, visiting the sick and the elderly, the lonely and those in distress. By the time of its’ centenary All Saints’ had only had four Vicars! Now the area had developed with modern housing in many parts and a much more middle class touch to the population. By this time also the Church in the nation was generally that of Christendom in a society nominally Christian by adoption. Even by the 1940’s only 10 to 15 % of the population had any close link to some church and All Saints’ reflected all these factors in its’ life. As there have been “ups and downs” there has always been an active body of people, of varying size, committed to a living relationship with God, convinced that Jesus Christ was and is a unique person, their Lord and Saviour.

The previous Vicar, Tim Wilson, came at the beginning of 1990 as the 2nd youngest Vicar at the age of 31! He left the parish on 7th October 2007 after 17 years of faithful service. He and his team of various Curates and lay leaders have built on the existing foundations, but also with an awareness of the need to be equipped for the future mission of the church. A number of early 1980’s changes within the church building had created valuable space along with other improvements. They also served to point the need for a re-ordered building, suitable for the worship and mission of the church in the 21st Century. Plans for: 1. Suitable facilities for fellowship, children’s’ work, other meeting rooms, kitchen, office/vestry and toilet facilities in a two level area at the rear of the building and 2. For a re-ordered worship area, adapting the existing nave and chancel, and also for a crèche and a further meeting room at the east end of the church, were drawn up and presented in April 1993. Due to loving and generous free will giving by members of the church, £230,000 has been raised to enable the scheme to be carried out. This giving has been tithed and has led to the support of projects in Britain, East Europe, in South India and other countries. 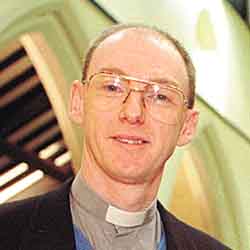 The first stage, at the rear of the church, came into use early in 1997. It became possible to use the building on all 7 days of the week and there was soon wonder as to how the church had coped without these facilities for all the past years! Then in an 8-week period in June and July 1999 the 2nd phase work was carried out. The former baptistery in the North Transept, under used for 25 years, was partitioned off and dressed in European ash to match the woodwork of stage 1. It has been equipped to provide the crèche. A former vestry has been improved to provide a meeting place for the teenage Pathfinders and other groups. The pews have been removed and the floor replaced. Comfortable chairs, capable of flexible arrangement, have been installed.

A European ash dais has been fitted at the front of the chancel and furnished with new ash liturgical furniture- Holy table, lectern and clergy desks/chairs. The previously under used font has been mounted on a moveable base so that it can be in a prominent place for baptisms at the main services. Improved lighting, heating and ventilation and a new sound system have been installed. The church has been re-decorated and the carpeting of the floor has completed the task. So the building has been transformed and equipped for the 21st Century, on the lines of the vision at the beginning of the decade.

An increased depth of committed shared life and fellowship, and a sense of the discipleship of a living faith lived out in daily life situations, has developed alongside this in the continuing life, worship, fellowship and pastoral care. Some aspects of the outreach include the Parent and Toddler groups and the Holiday groups for children -and more recently in the Alpha courses. These are seen to be an appropriate means for people on the fringe of the church, or even with no real experience of the faith to approach it in an unthreatening but yet comfortable context. The response has been encouraging.

We use cookies on our website to give you the most relevant experience by remembering your preferences and repeat visits. By clicking “Accept All”, you consent to the use of ALL the cookies. However, you may visit "Cookie Settings" to provide a controlled consent.
Cookie SettingsAccept All
Manage consent

This website uses cookies to improve your experience while you navigate through the website. Out of these cookies, the cookies that are categorized as necessary are stored on your browser as they are essential for the working of basic functionalities of the website. We also use third-party cookies that help us analyze and understand how you use this website. These cookies will be stored in your browser only with your consent. You also have the option to opt-out of these cookies. But opting out of some of these cookies may have an effect on your browsing experience.
Necessary Always Enabled
Necessary cookies are absolutely essential for the website to function properly. This category only includes cookies that ensures basic functionalities and security features of the website. These cookies do not store any personal information.
Non-necessary
Any cookies that may not be particularly necessary for the website to function and is used specifically to collect user personal data via analytics, ads, other embedded contents are termed as non-necessary cookies. It is mandatory to procure user consent prior to running these cookies on your website.
SAVE & ACCEPT